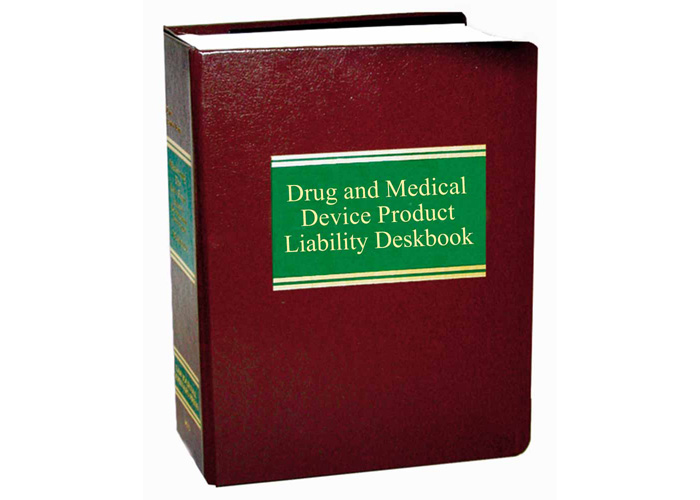 FDA-regulated products now account for an estimated one-fifth of overall economic activity in the U.S. They have also been the focus of a litigation explosion. This timely guide covers all aspects of litigation involving drugs, medical devices, vaccines and other FDA-regulated prescription products.

The Drug and Medical Device Product Liability Deskbook includes: detailed coverage of: warning-related claims and defenses; other information-based theories; strict liability; FDA-related per se liability; preemption of common law tort claims by the Food, Drug & Cosmetic Act and FDA regulations; class actions in drug and medical device litigation; theories of liability asserted against entities other than manufacturers; practical issues involving litigation management; the use of expert witnesses; and many other important topics. The authors include practical coverage of “what a litigator needs to know about the FDA.” You'll also find out how plaintiffs and defendants can enhance their chances for success before litigation even commences.

Book #00674; looseleaf, one volume, 1,158 pages; published in 2004, updated as needed; no additional charge for updates during your subscription. Looseleaf print subscribers receive supplements. The online edition is updated automatically. ISBN: 978-1-58852-121-7.

Anthony Vale
Anthony Vale is a partner in the Litigation Department of Pepper Hamilton LLP in Philadelphia. He has wide experience in mass tort litigation involving drugs, devices and chemicals. He has written and lectured widely on these topics at ABA, IADC, ACI, and DRI meetings.Mr. Vale was chair of the Class Action and Multiparty Litigation Committee of the International Association of Defense Counsel, chair of the Toxic Tort and Environmental Law Committee of ABA/TIPS, and a member of the CLE board of the American Bar Association Tort and Insurance Practice Section (ABA/TIPS). He has also served as president of the British American Chamber of Commerce of Greater Philadelphia.Mr. Vale received his LL.B. in 1972 from the University of Exeter in England and attended University of Pennsylvania Law School. He is admitted to practice in Pennsylvania and before the United States Supreme Court, the Third, Fifth and Eleventh Circuit Courts of Appeal, and several federal district courts.

James M. Beck
James M. Beck is counsel in the life sciences health industries group of Reed Smith LLP in Philadelphia. He has overseen the development of legal defenses, master briefs, and dispositive motions in numerous mass torts, including Seroquel, a Merck analgesic product, diet drugs, Baycol, and orthopedic bone screws. Orthopedic Bone Screw ended with summary judgments in more than 170 cases, and prevailing in every appeal. Mr. Beck is a member of the Product Liability Advisory Committee (PLAC) and has sat on PLAC’s case selection committee since 1997. He has written over 60 amicus curiae briefs on product liability issues for PLAC. In 2011, Mr. Beck was awarded the PLAC’s John P. Raleigh Award, the highest honor given by the organization to one of its members. This award recognizes Mr. Beck’s overall contributions to the law of product liability, making him the eighth recipient of the Raleigh award in the almost 30-year history of the PLAC. Mr. Beck has also prepared amicus briefs for the American Bar Association, the American Civil Liberties Union, the American Medical Association and several of its state affiliates, the Anti-Defamation League, the Business Roundtable, the Pennsylvania Defense Research Institute, the United States Chamber of Commerce, and the Washington Legal Foundation. Mr. Beck has been chair of the Publications Subcommittee of the Mass Torts Litigation Committee of the Litigation Section of the American Bar Association since 2002. He has been named Outstanding Subcommittee Chair three times, in 2003-04, 2006-07, and 2008-09. A graduate of Princeton University (B.A., cum laude, 1978) and the University of Pennsylvania Law School (J.D., 1982), Mr. Beck is admitted to practice in federal and state courts in Pennsylvania, in the Supreme Court of the United States, and has been admitted in various federal and state courts pro hac vice.