Doing Business On The Internet: Forms and Analysis

A practical guide to Internet business transactions. With over 65 forms and checklists from actual Internet deals and transactions, it’s a hands-on guide to the law of Internet commerce. 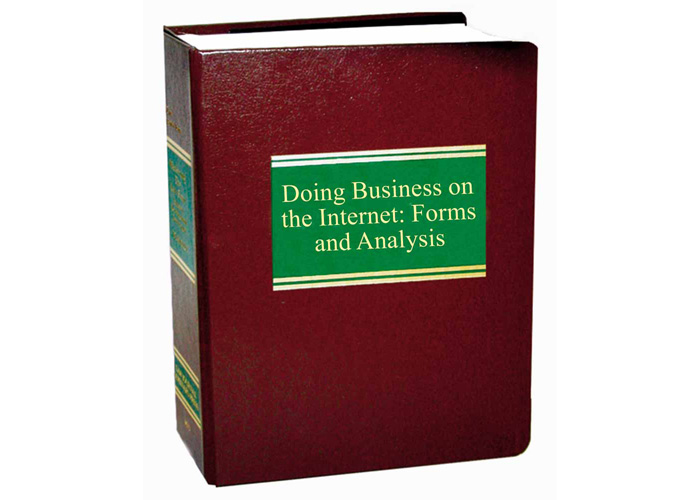 Electronic commerce has grown from a high-tech niche to a billion dollar industry and continues to grow. Doing Business on the Internet: Forms and Analysis book is the most complete, up-to-date legal guide to business transactions in this environment.

With over 65 forms and checklists from actual Internet deals and transactions, Doing Business on the Internet: Forms and Analysis is a hands-on guide to the law of Internet commerce. Whether you are a novice or a webmaster, it provides you with both practical guidance you can immediately put to use and the legal background you need to master the issues. From registering and protecting your domain name, to contracting for Internet and Web site services, to patent, trademark and copyright issues, this book shows you how to adapt your business plans and strategies to evolving legal requirements. You'll read about: licensing of Internet content; enforceability of online contracts; domestic and foreign tax treatment of Internet transactions; international obligations when doing business online; patent ability of business methods; precedents in trademark infringement; drafting a privacy policy; and other important issues—all clarified by state-of-the-art model agreements.

The authors have taken great care to include many different perspectives in their analysis and examples. Whether you are an attorney or an end user, vendor, content provider or Internet access provider, Doing Business on the Internet: Forms and Analysis can help you avoid costly missteps and make the most of online commerce.

Jeffrey D. Neuburger
Jeffrey D. Neuburger is a Partner in Proskauer Rose LLP, where he Co-chairs the firm's Technology Practice Group and Chairs the Firm's Technology, Media and Communications Practice Group. Mr. Neuburger is also an Adjunct Professor at Fordham University School of Law, where he teaches e-commerce law. Mr. Neuburger frequently writes and lectures on emerging technology law. He is the Chair of the New York State Bar Association's Special Committee on Cyberspace Law. Prior to practicing law, Mr. Neuburger was a systems analyst with the General Electric Company for six years.

Jeffrey P. Weingart
Jeffrey P. Weingart is a partner in the Litigation Group at Meister Seelig & Fein LLP and is also active in the firm's Entertainment and New Media practice. He has extensive experience in transactional, licensing and litigation matters involving patents, copyrights, trade secrets and trademarks in the areas of information technology, computer software, the Internet, data security, and digital rights management. Significant clients include software development firms, corporate IT users, Internet companies, medical services providers, consumer goods manufacturers, insurance and financial services companies, publishing concerns and providers of educational and entertainment-related content. Prior to practicing law, Mr. Weingart was an editor at a major publisher of computer industry newspapers and magazines. Mr. Weingart received his J.D. from St. John's University School of Law and his B.A. degree from Columbia University. He is admitted to practice in Connecticut and New York and is admitted to appear before the U.S. Court of Appeals, Second Circuit, U.S. District Court, District of Connecticut, and U.S. District Courts for the Eastern and Southern Districts of New York.

Julian S. Millstein
Julian S. Millstein was a founder of the New York IT law firm Brown Raysman & Millstein, and is one of the earliest practitioners of computer and Internet law. A former Adjunct Professor of Law at Fordham University School of Law and past chair of the New York State Bar Association's Committee on Internet and Technology Law, Mr. Millstein practices as Special Counsel with Moses & Singer LLP in New York City to support mutual clients, and maintains his own legal practice as well for select clients. Mr. Millstein also provides neutral Alternative Dispute Resolution services as a mediator and arbitrator with Julian S. Millstein ADR Services, with a focus on IT, Outsourcing and e-Commerce disputes. Mr. Millstein is a former co-editor-in-chief of the e-Commerce Law & Strategy newsletter from Law Journal Newsletters. Prior to practicing law, Mr. Millstein had an extensive career in data processing as a computer programmer, systems analyst, and consultant.